The rock concert poster artist was born from an upheaval in social change in America. The 1950s have been described many many times as being a decade of draconian rules, regulations and controls. Stay in line, follow the rules.  The wife will watch the children and you will be rewarded with a 9 to 5 job and a stamped out house with a picket fence. Very Black and White existence. 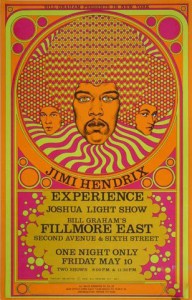 Some like to think the 1950s were a more simple time, but it came with a price. Individual Freedoms. The 1960s come thundering in. This new generation is questioning everything.  They want answers about the status quo of outdated laws, women’s rights, civil rights and a war we never should have started.  Everything now, is in technicolor.

There was a change in the air. The new generation became stronger and closer. This spawned counterculture movements and communities. From this evolved concerts and ballroom dances. The rock concert poster artist would do the advertising and posters for these events. These events produced the terms “rock concert” and “rock star”. Rock ‘n roll was not your typical Elvis Presley or Buddy Holly anymore. The rock music was experimental with elaborate light shows and became huge events like Woodstock. 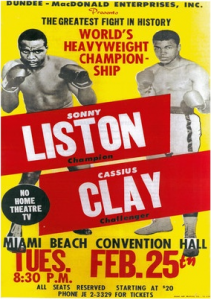 There would be no rock concert poster artist in the 1950s. Maybe not even a designer. Many posters for boxing events or wrestling events done as a one color print job in a print shop. Early rock ‘n roll and soul music posters had about the same look as the boxing posters.  However, these posters were the origin of the 1960s psychedelic poster art that would became the norm.

Rock concert poster artists would come from very different backgrounds. But, all were natural artists before specializing in posters. Many of them successful in other fields and/or from teaching positions. Cartoonists, illustratators, designers would all come to the Bay Area (the mecca of rock poster art) and contribute their style to a still fascinating art form.  An art form that would continue on to become increasingly rare and valuable.

These days rock poster art hangs in museums and is great investment oppurtunity for some. They are valuable pieces. Especially first print editions in mint condition.  Depending on the venue, event, band and poster artist it could be worth thousands of dollars.  Not bad for a poster you would have seen plastered on a telephone pole 40 years ago.

Many of these artists are still alive today and produce wonderful works of art. It is most definitely worth checking out.  Although they were part of history in the middle of a counter cultuer movement, they were first and foremost natural born artists.