Of course we mean “The Golden Era” of iconic rock posters between 1955 and 1971. (not the California Gold Rush of 1849). But, I muse on the parallels between them sometimes. “Go west young man!” – Horace Greeley 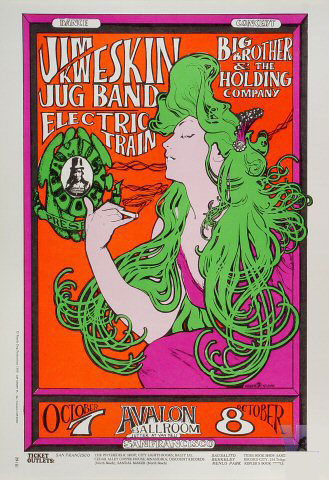 We are certainly going to be talking about “Sex, Drugs and Rock and Roll”– Ian Dury & The Blockheads … well, because a man summed up a whole decade of  life style in a song title! Amazing!  However raw that may sound, it is relevant to our history of rock poster discussion and iconic rock posters in general.   We’ll also (of course) be discussing famous rock stars and rock concerts (venues and their promoters) the counter culture and the who, how, when, why and where of it all.

What is very interesting to us is bringing to light a cottage industry that grew from cultural change (musically and socially) in America in the 1960s and early 70s. Uncovering its early history and how some of these famous rock posters became the magnificent, bold, colorful icons to a generation.  Those who were determined to open their minds, usher in new ideas and bring about big changes in our land. The world would never be the same after the nineteen sixties.

Without going into great scope – we’ll describe below 9 talking points which should open up some topics of great conversation. Here we go:

1) How famous rock posters evolved from a combustion of 1950s wrestling / boxing promotional posters and a need to express new forms of experimental music, life styles and counter culture (Hippies)

2) 1960s America and the world was in a bubbling, rebellious state of change. Protests for many causes, Rock & Roll, riots, aftermath of The Beat Generation (beatniks), The British Invasion of music (in particular Beatlemania), the Vietnam War, Civil Rights, Men and Women’s Rights, etc.

3) The arts, music, entertainment, lifestyle, and fashion all followed suit as the world changed drastically. What once was underground culture – was now becoming very common in middle America.

4) A time when experimentation, revolution and freedom was everything. The famous rock posters artists lived it. Experimentation in drugs, sex, rock music and the colorful, explosive and artful graphic iconic rock posters depicted it all.

Most went electric and got very heavy into creating new styles & forms of music.  Some of the most famous rock posters followed the same experimentation using creative graphics, lettering and grand colors… there were no boundaries.

6) Psychedelic Posters as a numismatic type of investment. Believe it, its true and its happening now!   They can be worth allot, depending on the printing and condition.  Also, these iconic rock posters are displayed as high art pieces in The Smithsonian, SF Museum of Modern Art among many, many others.  Not just a rag on a telephone pole anymore!

7) History of rock poster evolution would not be complete without promoter Bill Graham.  His enormous role in reviving and distributing the rock poster to promote his clubs The Filmore East and West all through the 60’s. (some of these are the most coveted among collectors)

8) The famous rock posters artists. Who were they? Where did they come from? How did they imagine such unbridled, wildly original, always colorful little masterpieces?  There were “The Big 5” whose posters are very recognizable and who were famous in their own right.  But, there are lessor known artists that were super talented, we’ll discuss them too.

9) Certainly it was the ROCK STARS not the rock poster that were most famous. Rock posters were just throw away type of items – like a whole new batch would be printed & coming out for next weeks concert.  Kids had no idea the value these mini works of art would have someday.

Enjoy our magical history tour of sorts. We’ll journey through to see what fostered such free thinking and the art and music and movements that followed.  It’s what made the 1960s so incredibly important to our history in The United States of America.

Some links you may enjoy: