Continuing on with my previous post on original psychedelic rock poster artists, we might ponder where the inspiration for such inventive, bold, brilliant works of art would come from. Many might say from the hallucinogens that were ingested at the time. And that would be the easy answer. But, if you examine the lives of these original psychedelic rock poster artists you will find deep-seated roots in art dating back to their childhood.

It’s not to say that the popular drugs of the day didn’t have influence in their work (the artists will tell you they did). However, drugs did not make them the brilliant artists they were (or are).   You can uncover (actually in many pages of this blog) that the artists came from many backgrounds. Some cartoonists, some musicians, some with minimal accreditation and some with high honors in art instruction. With the innate talent they were born with, these original psychedelic rock poster artists were destined to be artists in one form or another.

In the 1960s it was an open playing field. The new generation wanted to rewrite almost every thing that had been the status quo. This meant not only to be an activist in art, music, literature, film and fashion–but important social and political issues of the day, as well.  The germination of these new ideals would come to young minds through literature and discovering the world at large. 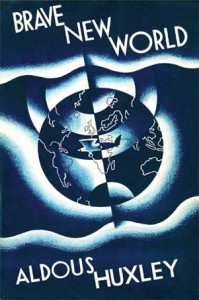 Personally, I believe books like Brave New World by Aldous Huxley were very potent. Bringing an ominous concept of a capitalist world in which people are genetically designed to be passive and useful to the ruling class. Concepts such as family, freedom, love, and culture are considered grotesque. Enough to start a fire? Considering the state of affairs of our country in the 1960s, maybe so.

After all the author was an extraordinary man who brought to his work a strong sense of the world into which he was born.  There were many adorned relations in his bloodline. Including, his grandfather (Thomas Huxley) who helped Darwin realize his theory of evolution. So, even though this is a science fiction/dystopian novel, its ideals come from a credible & worldly source.

It is interesting that psychedelic art  and surrealist art are similar in the fact that they both prescribe a mechanism for obtaining inspiration. One relies on the observance of dreams and the other on hallucinogens. Both tied to important developments in science, Freud’s theories of the  unconscious and the discovery of LSD. The original psychedelic rock poster artists and their community were expanding their minds, their art, their freedoms and color the world unlike the stagnant black-and-white 50s.  This would cause the so called Generation Gap and the youth of the country were ready to embrace it.

How drugs of the 60s changed art

To explore famous rock posters in detail you may have a hard time separating them from the works of the 60s psychedelic poster artists. There are many reasons for this.

The “rock” poster was invented to advertise events both musical and social that were growing larger and larger in the San Francisco area. The seeds of the counterculture (or hippie movement) were coming of age. This movement was bound to remove itself from the ideals and rigidness of the 1950s. Creating a new culture, with its own ideals, experiences, music, fashion and sustainability.

The 60s psychedelic poster artists were very much a part of this experimentation.  The three martini lunch was out! LSD and marijuana would take its place in the new counterculture. It was as much a rebellion as it was a mind expanding new frontier.

What was black-and-white in the 1950s was now bright and vibrant colors in the 1960s. The light switch had been turned on. Experimentation in all types of media would push the limits of good taste in order to be different or original. But then, bad taste could be good taste in these newfound freedoms of expression.

Whatever the case, there was much art being created around this time. Some hang in museums and some were swept away as trash. I’m speaking particularly about rock posters and handbills made usually for concerts at ballrooms and auditoriums.

The music drove the 60s psychedelic poster artists to aspire to what they did. Mostly commissioned to do concerts rock concerts, but, many would create the posters and put the shows on themselves. A good example of that would be the Pinnacle Rock Concerts that were put on in LA.  (See Pinnacle Concerts posts on this site)

Although we concentrate mainly on the art, artists and famous rock posters of the 1960s–many great changes in our country were made because of the ideals and grasp for a better world from the counterculture.