I think its safe to say that every artist – commercial, fine, abstract, modernist, graphic, etc. – has a touch of “bohemian spirit” in them. I think to express one’s self freely and creatively its probably there to some degree. This was certainly the case for our featured artist Wes Wilson. Which is a dichotomy of sorts as you will see.

Robert Wesley Wilson was born in Sacramento, California in 1937. Growing up interested more in nature and the outdoors, studying forestry and horticulture with no special interest in art.  After serving in the army during the Korean War, Wilson returned home to California and studied philosophy at San Francisco State College. Dropped out in 1963 to support his family and went to work for Bob Carr and Contact Printing for a few years. 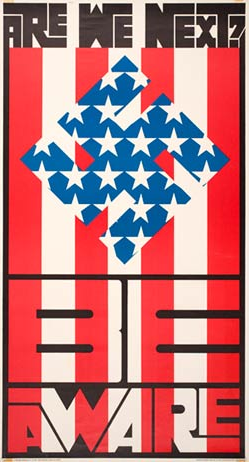 During this period Wes Wilson would create his first poster. Man, it was a whopper! In 1965 he designed and printed “Are We Next?” this was called “too paranoid” by none other than Allen Ginsberg and questioned by The Anti-Defamation League, among others I’m sure. Let me digress for a moment: You must understand that Wes is a professed true American. He has lineage (on his mothers side ) dating back to the 1st Secretary to the Continental Congress – Charles Thomson. Not to mention his honorable military service to the country.

The “Are We Next?” poster was not being disrespectful or anti-American. It was Wilson’s opposition to the war in Vietnam and The Bay of Pigs before that. But, as you can imagine it was a real shocker in 1965.

Turns out, this firestorm caught the attention of Chet Helms at The Family Dog. “Thats what he liked about my work” says Wilson. Thats how Wes Wilson began his career as psychedelic poster artist. He would go on to do many, many posters for rock shows at The Family Dog’s Avalon Ballroom.  From there he moves on to Bill Graham and The Filmore venue posters. This association was good and more lucrative until Graham started cheating the artist out of royalties. This severed the relationship forever.

Wilson has been touted as the “pioneer of the psychedelic poster”. They may not be far off. The exaggerated freehand lettering and influences of Alfred Roller (1908) and other Vienna Secessionist could be a factor. He created fluid forms with letters in a pulsating smooth wavelike motion.  He also used all available space with lettering and created shapes from them.  Giving one a real “psychedelic” sensation.  It became the standard for “rock posters” and was copied over and over many times throughout the late 60’s.

By the Seventies Wilson had relocated his family to a quiet farm in Missouri and continues to create paintings and posters on occasion.