When Did Moscosos Comic Books Begin?

When Did Moscosos Comic Books Begin?
With our theme on psychedelic artistes, it is noteworthy that Victor Moscoso’s (famous rock posters artist) streetwise upbringing in Brooklyn gave him a no-nonsense type of approach to art and art projects. He takes a very practical view of commissioned assignments and personal projects.  Lucky for us! I believe this led to many projects and encompassed a wide range of work he may have not discovered. This may include (but not limited to) his work and leadership at Zap Comix and other Moscosos comic books.

This image to the left is the very first Zap Comix Book. Launch date was March 1968 and the brain child of legendary underground comics artist Robert Crumb (R.Crumb).  Crumb would recruit other artists S. Clay Wilson, Robert Williams, “Spain” Rodriguez, Gilbert Shelton, Victor Moscoso and Rick Griffin to collaborate with him.  The latter two with reputations as psychedelic poster designers, in their own right. They would all come on board as the new roster of artists for Zap Comix.

Moscoso and Griffin worked well as partners on many poster designs and projects.  Griffin had actually made his bones doing a surfer comic strip “Murphy” in 1961 and started germinating the idea of doing comics with Moscoso, before Zap was published.

It is claimed that the term “comiX” (with an X) refers to the traditional comic book style of Zap, and its mixture of dirty jokes and story-lines.  Moscosos comic books (Zap Comix included), were more of an an illusory / optical type of art.  But, “Crumb and Griffin took the taboos straight on” as Moscoso puts it.   The comic books were labeled “Fair Warning: For Adult Intellectuals Only”.  This was soon to be taken very literally, as this obviously was not a kiddies comic book. So bad, that in some places you could not buy this over the counter.  This made the comic even more coveted and wildly popular.

Zap#4 was most infamous as it depicted an R. Crumb story “Joe Blow”.  It was about a incestuous All-American nuclear family . Their motto being “the family that lays together stays together”. Numerous “community standards” obscenity busts and court cases were brought against the publisher Print Mint. This was actually was banned in New York from over the counter sales.

According to Moscoso – R. Crumb had been a super fan of he and Rick Griffin and after seeing poster Family Dog #89 an imitation of the Sunday Chronicle pages. After seeing that he went home and created Zap Comix. They were in essence his heros.

That is actually a very interesting time line and important info.  All of these guys were so famous, many times you dont know who came first.  But, to answer the question to our post – When Did Moscosos Comic Books Begin?  I would have to say not in the FIRST issue of Zap Comix.  But, as we revealed earlier, obviusly a Moscoso/Griffin poster was the inspiration.  It would probably be the second issue moving forward to this day.  Moscoso was heavily involved in the comic even in distribution and management. He was instrumental (IMHO) in making Zap Comix the phenomenon that it is.

It does not come down to a matter of style or who’s the better artist or possibly who had more experience – that is all relative to the viewers style and taste.   We are talking strictly about formal education in art. Now, this was a good thing and a bad thing as it turned out.  According to him -the structure  and rules of his formal art education had to be torn down and rewired in order to experience the freedom he needed to excel in poster art.  Wow! Artist sacrifices for his art, yet again.

This is amazing to me.  I have been an admirer of cartoonist, artist, teacher and rock concert artist Victor Moscoso for many, many, years.  Now, to discover the struggle and reversing of academic knowledge just to do rock concert posters…sounds pretty incredible now. But really, it goes perfect with the 1960s mentality.  Being experimental, being free, and liberating (I think were his words) were the direction & expression of art, music, and the counter culture itself.  I’ll give you a couple of quotes here that I feel are relevant and capture the essence of this era and comment on fine art vs. commercial art.

“The 1960s were where fine art and commercial art met. It was a great time, it meant breaking all the rules” – Stanley Mouse

“It’s all commercial: The Sistine Chapel is a commercial illustration for the Catholic Church.” – Victor Moscoso

According to my research – he began the poster art as a resident of Haight Street (of the legendary “Hippie” Haight-Ashbury intersection) somewhere in 1966.  He said “It was cheap and the neighbor hood just kinda sprang up-we had no idea we were “cutting edge” at the time. From this quote I get the feeling that Mr. Moscoso was one first to make it on the scene and producing rock concert posters for Chet Helms and Avalon Ballroom

Growing up in Brooklyn comes with street smarts and Victor was no exception to the rule.  After much training and school…”On The Road” – Jack Kerouac was published in 1959 he was compelled to move west to California.

Well that is a brief introduction to our featured rock concert artist Victor Moscoso.  Next up: more about his history, artistic heritage, accolades and what made his rock posters stand out from the rest.

Why is rare Victor Moscoso poster art priceless to me? I’m trying to examine that in this post.  Just perfect art in my opinion.  What is it?  Why does this attract me so much? Could it be he is a Spanish artist? It might be-who knows.

Some of my first formal training or awareness of classic art was exposure to early Spanish artists.   I could do without Monet or Van Gogh or Renoir – (although greatly admired) did not float my boat.

What did …were the men from Spain – Goya, Greco, Picasso, Dali.  To me the art was just unfathomable and extraordinary to unbelievable heights. What minds, What imagination.  The lineage of great art does not stop in the 19th century; which is apparent in rare Victor Moscoso poster art – painting and other multi-media. Maybe it is the bold strokes and exquisite choice of color inherent to the works of these Spaniards.

Who is Victor Moscoso?  well, you’re on the Famous Rock Posters web site – so you should have a clue.  He was best known for psychedelic rock posters/advertisements and underground comix in San Francisco during the 1960s and 1970s.  Also, Moscoso was one of the first rock concert poster artists of the 1960s era with formal academic training @ Cooper Union, NY – Yale – SF Art Institute and taught there as well.

Sidebar: Josef Albers (March 19, 1888 – March 25, 1976) was Moscoso’s instructor at Yale. He came from (most influential) The Bauhaus school of Germany. To escape the Nazi pressure he emigrated to the USA and landed @ the Black Mountain College, N.C. which is near my hometown. More on that in another post. He is best remembered as abstract painter and “Homage to the Square” series and as theorist.

Ok, back to Victor. I would say his first big break was designing posters for the concerts & new music scene in the dance halls and auditorium’s in SF. It culminated to international attention in the late 60’s. Next would be underground comics ,album covers, billboards and multi-media.  He went on to win two Clio awards in advertising and design.

Images of rare Victor Moscoso poster art are found easily on the net. But the actual posters you seek could be more difficult to find. If your interested here is a nice place to start with a small-medium-or big budget (super collectables)

If anything, view nice – clear- large images of these beautiful works and see for yourself why rare Victor Moscoso poster art is priceless and why I am such a huge fan of this magnificent artist!

Well, the latest news on this Rose Bowl Rock Poster is the seller decided to take one auction it off on Ebay. it sold and made a pretty good return at $52.66 I believe. If you remember this particular seller bought 30 of these American Music Show Handbills at an estate sale recently. He had sent me some images and info (as much as he could) on the piece to see if I could could come up with an appraised value.

If you look at many of these Rose Bowl Rock Poster designs – whether it is full posters, handbills, or post cards (which were the printed pieces of choice to promote the concerts) you get a certain feel for the value. Handbills (unless very rare) are usually in the $50.00 range. This is a beautiful 8 X 4 mint condition card by artists VanHamersveld and Schnef and a very nice affordable collectors piece.

If you are interested in purchasing one of these you can keep an eye out on Ebay as they will possibly be showing up time to time. Or you may shoot us an email and I can put you in direct contact with the seller.

You know there are many stories that go along with that handbill and that particular 1968 American Music Show @ The Rose Bowl. One I’ll share now…Sam Andrew (Guirartist Big Brother & The Holding Co.) quotes:

“We hopped in a limousine after the gig, and the fans piled on top. I was afraid we would be crushed.”
15 September 1968   Rose Bowl    Pasadena 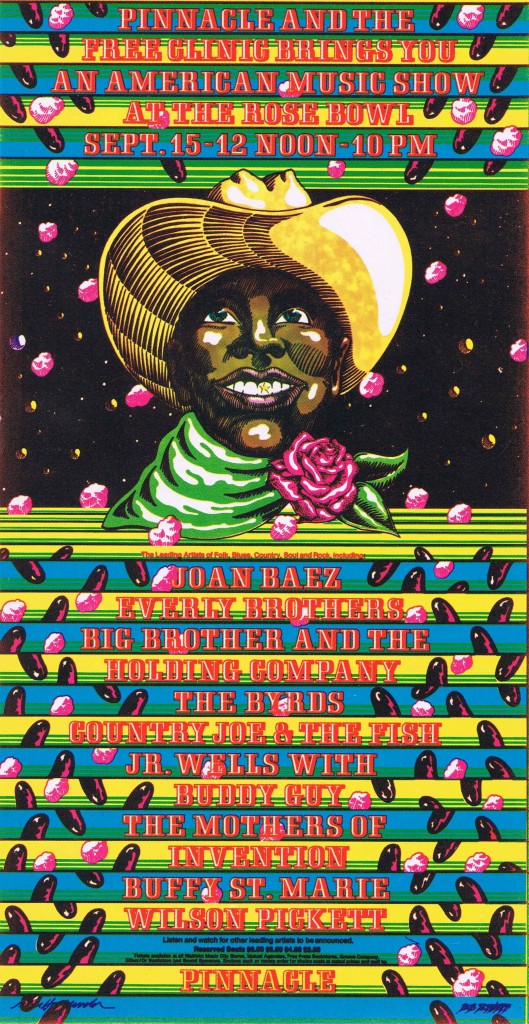 This was an interesting quote, because I just read in “The West of Center: Art and The Counter Culture Experiment in America, 1965-1977” that this  Rose Bowl concert was not well attended.  As a result Pinnacle (Three partners known as Pinacle Rock Conerts) failed financially and the Shrine Concerts ended.

Many of the Pinnacle Shows were at the Shrine Auditorium. Also, John Van Hamersveld (one of the artists on this piece) was in fact one of the founding partners in Pinnacle Rock Concerts.